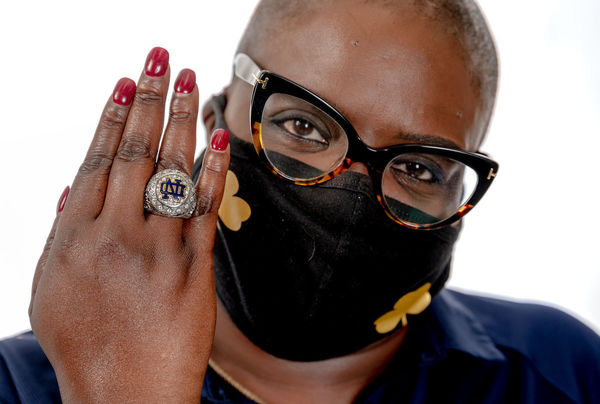 Spontaneous dancing happens. But most people aren’t in front of national cameras when it does. Sharla Lewis, Notre Dame women’s basketball program manager, couldn’t help herself after the team’s 2018 championship win, and ESPN captured her victory jig.

“I went from praying in the stairwell of the arena to realizing we won the game. I joined the team on the court and just started dancing. Then I got about 80 text messages from people who saw me on ESPN,” she said. “It was definitely my most memorable moment of being part of ND."

Lewis has had other unforgettable moments at ND, like clinching a job interview question that former coach Muffet McGraw asked. The question: “What does your closet look like?” Her answer: “It’s color coded.”

“I’m pretty sure that’s why I got the job,” Lewis said.

McGraw hired her into the program as an administrative assistant 10 years ago, a role that launched her into her current position and its duties as program manager.

From financial services to women’s collegiate basketball, Lewis’ career path doesn’t seem to connect at a glance. But if you look closer, you’ll see more than one connection.

She manages the everyday functions of the women’s basketball office, with a focus on the Under Armour gear budget and the team’s fundraising goals, supports the coaching staff, acts as a liaison with the team’s fans and out-of-town guests and assists with the planning of on-campus recruiting efforts. She also supports the players.

She believes part of her job is to serve — a theme of her personal life. Growing up in Chicago, where both her grandfather and father were lifelong pastors serving the city’s South Side, she learned to serve those in need. Her two brothers continued the pastor tradition and started their own ministries. Lewis helped each of them as they established their churches and supported their efforts to build their congregations. She has a heart to serve others, she said with a wide smile.

“One thing I love about being in the women’s basketball program is the opportunity to be available to the players without expectations,” she said. “I can listen. I can encourage. I can give advice. I can just be a support person to them when they need it.”

Fundraisers are key to the program’s ability to give back to the Notre Dame community and the greater South Bend area, Lewis said. This year, giving back includes participating in racial unity and justice walks and rallies.

“The players themselves are the driving force behind it, and we have conversations as a team about how and where we can serve. It’s bigger than racial unity, but that’s a part of it,” she said. “We support the other teams and athletes on campus by showing up and standing with them.”

Coach Niele Ivey, Lewis, players and others in the program have been actively participating in rallies for racial justice and unity at Notre Dame and in South Bend. In her personal life, Lewis is also active in Be the Bridge to Racial Unity. The national program aims to provide an avenue for racial healing and reconciliation. Within her local group, there are three Black women and three white women, all from different churches in the South Bend area. The program brings them together monthly for encouragement, conversation and, ultimately, friendship.

“We talk about our worries and we ask each other questions. Then tears flow and we can feel each other’s real concerns,” she said. “I can talk about my concerns for my husband being an officer and a Black man, and that kind of dialogue helps us understand each other.” (Lewis’ husband, Levi Lewis, is an officer with the St. Joseph County Sheriff’s Department.)

When people cry together, there is immediate unity in humanity, and this is what makes Be the Bridge work, according to Lewis, whose pastor at Greater St. Matthew Church introduced her to the program after his wife completed it last year.

Especially during this time of need for racial healing, in addition to the uncertainty of the coronavirus pandemic, Lewis counts herself blessed to be a part of both Be the Bridge and the women’s basketball program. With the pause of in-person fundraising events in March due to the pandemic, she is looking ahead to planning an event that will keep those who attend safe with physical distancing and face masks required, and help catch up on the team’s fundraising goals.

“We didn’t have the opportunity when coach McGraw was the head coach to have a golf outing,” she said. “So we decided that’s something that we can do during this time to bring in the dollars we need to be able to give back to the community."

When Lewis wants to get far away from crunching numbers and her management duties, she likes to be crafty. One of her hobbies is creating T-shirt designs. She has made Juneteenth and Black History Month event T-shirts, among others.

Her latest — Ivey Era — is a personal welcome and commemorates Ivey as the first Black woman to lead the women’s basketball team at Notre Dame. Lewis gave one to each of the coaches when Ivey was hired as head coach earlier this year.

“I’m so excited to have an opportunity to be here at the start of her career as the first Black female head coach at Notre Dame. It’s huge. And just to be a part of that makes me feel great,” she said.